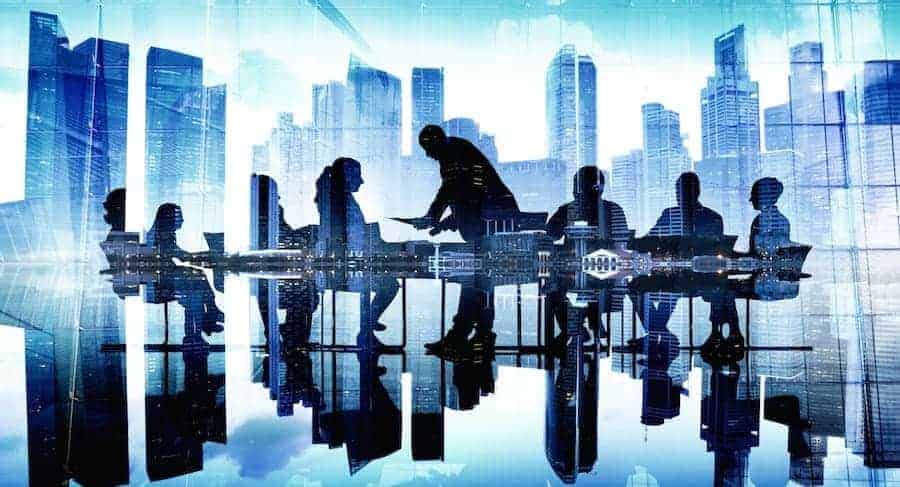 The differences among maturity groups are even more pronounced when respondents are asked how they deploy cross-functional teams. Executives and managers at digitally maturing companies, compared with developing and early-stage ones, say these teams are more likely to have considerable autonomy regarding how to accomplish goals (69% versus 53% and 38%, respectively), to be evaluated as a group (54% versus 33% and 20%), and to have their senior leaders create a supportive environment for their teams (73% versus 48% and 29%). These distinctive aspects of cross-functional teams found in digitally maturing companies echo the flexible, organic aspects of the ecosystems we observed in external partnerships, and they likely drive innovation in similar ways.

(Percentage of respondents who agree or strongly agree)

A cross-functional team starts with people from multiple departments. Rather than answering to whichever line manager they’re officially assigned to, they might be accountable to a project manager or a corporate innovation executive. What are the benefits of cross-functional teams? Survey respondents cite enhanced access to resources, such as diverse perspectives, broader skill sets, and new ideas, as the most important one.

Operating via cross-functional teams may pose new kinds of management challenges, however. More than half of respondents cite problems with team alignment and an unsupportive culture as the biggest barriers faced by cross-functional teams. To overcome these challenges, companies must secure buy-in via clear and copious communication with employees, says Matt Schuyler, chief human resources officer at Hilton, the McLean, Virginia-based global hospitality company. For Hilton’s part, he says, “we see great benefit to our business and our culture when our team members work cross-functionally, so we spend a lot of time challenging our teams to think outside of their own subject-matter expertise. To encourage a more collaborative mindset, we invest time reminding them that you can have it all here and that communicating outside your silo is, in some ways, more important than within your silo.”

Michael Arena, former chief talent officer at General Motors and author of Adaptive Space: How GM and Other Companies Are Positively Disrupting Themselves and Transforming into Agile Organisations, cautions that, while cross-functional teams are an important source of innovation at his former company and other digitally maturing ones, they’re not a panacea. Innovation is a process, and it occurs in stages. “For Organisations to be adaptive,” he says, “the very first thing we need to do, especially as we’re talking about org design and practices, is to ditch the one-size-fits-all mindset.”

Arena studies organizational network analysis and the impact of organizational design on innovation. He notes that cross-functional teams may be brought together to address one aspect of innovation (say, ideation), but team members may have a different role when it comes to other aspects of the innovation process (say, diffusion). “It could be that for six weeks we’re pulling people together for a specific purpose,” Arena explains. “They’ve got these milestones, and for six weeks they’re dedicated to getting something across the finish line. And that’s the design for that six-week interval. Then those team members are going back to their steady-state jobs where we’re going to ask them to help diffuse this out across the broader organization.”

“When you’re talking about diffusion of new ideas, having proximity is absolutely essential. Passion spreads face-to-face.”

As an example of the benefits of designing teams for both ideation and diffusion of ideas, Arena offers up Motorola’s invention of the Razr mobile phone. The Razr was a stylish, best-selling device in the years just before smartphones. Motorola, a mobile-phone pioneer, had been pushing for a breakthrough but had faltered until assigning a cross-functional team to the challenge. “They actually forced this arrangement in their innovation lab in Chicago where they brought the individual development groups — design was there, engineering was there, marketing was there — and they put them all in the room together,” Arena says. “They kept them in their clusters, so they could do the deep-dive work and develop new concepts. But then they could synchronize with the broader functions in the room much more in real time so that they were testing and diffusing ideas and responding based on the feedback they were getting.” Cross-functional teams matter a lot in discovery, he adds. “It matters even more in diffusion.”

One question companies wrestle with is whether to colocate cross-functional team members or to let them interact virtually. The project’s stage can be a deciding factor, with colocation less critical, in Arena’s view, during the discovery phase. But “when you’re talking about diffusion of new ideas, having proximity is absolutely essential,” he says. “Passion spreads face-to-face.”